If there ever comes a day when we can't be together, keep me in your heart, I'll stay there forever. Winnie the Pooh

Love is Patient. Love is Kind.

The right wing conservatives think it's a decision
And you can be cured with some treatment and religion
Man-made rewiring of a predisposition
Playing God, aw nah here we go
America the brave still fears what we don't know
And God loves all his children, is somehow forgotten

We become so numb to what we're saying
A culture founded from oppression
Yet we don't have acceptance for 'em
Call each other faggots behind the keys of a message board
A word rooted in hate, yet our genre still ignores it

Gay is synonymous with the lesser
It's the same hate that's caused wars from religion
Gender to skin color, the complexion of your pigment
The same fight that led people to walk outs and sit ins
It's human rights for everybody, there is no difference!

Live on and be yourself

When I was at church they taught me something else
If you preach hate at the service those words aren't anointed
That holy water that you soak in has been poisoned
When everyone else is more comfortable remaining voiceless
Rather than fighting for humans that have had their rights stolen
I might not be the same, but that's not important
No freedom till we're equal, damn right I support it
~Mackelmore, Same Love

I make no apologies to my atheist and agnostic friends and family when I make this declaration: I'm a Christian.  I believe in God.  Oh, do I ever believe in God. I'm not trying to convince them that I'm right and they're wrong.  But I have stories to tell that are true and personal about times when I feel like He's speaking directly to me.  Giving me a message, and I can't not share it.

The last few months I've been trying to ignore His gentle whispers.  Which became louder.  I continued to ignore Him.  One day at the gym I heard a song and it wasn't something I would have ever heard on my own because it wasn't the genre I typically play on the radio.  The message was powerful and exactly what had been weighing heavily on my heart.  I was in awe of this song.  Of the bravery of the singer.  But the coward in me continued to deny what was starting to bubble from deep inside my soul to the surface of my lips.  Until one day I finally shared what had been weighing heavily on my heart, with Chris, who in his usual way, just listened.  But when I brought it up again, a second and finally a third time, telling him I needed to share it through my words on paper--he confessed: I don't think you should write about this.

Because I knew what he was saying and what HE was saying were two different things.  God, ever so patient, gave me the last and final push.  I had heard that song many times at the gym.  But I wanted more.  I wanted to hear the words, over and over until they saturated my soul.  I wanted to hold the words in my mouth, chew on them slowly and deliberately.  I downloaded it.  As I listened to it in it's entirety, I realized it was slightly different than the version on the radio.  The last verses, repeated six times is the same message read to us at our wedding:

And with that, I finally agreed to do what I know in my heart He's leading me to do.  To share my heart about a topic people get very passionate about.

Here is what I need my children to know--to see it in black and white and declared to the world:  I love you.  No matter what, I love you.

Something happened to me when my fourth child was born.  Vincent has changed me as a mother.  He helped me throw out all the rules.  To follow my heart and to trust my intuition.  And my heart has been wanting to share this story: The story of the time I sinned so deeply, I was asked to leave my church.

Love is patient, love is kind.

Chris had asked me to marry him.  Over a year before, we had met at a time when we were both looking for something:  God.  And He found us.  And we loved Him.  Cautiously we started going to church.  Not quite feeling like we fit in: we didn't know how to pray in the same way everyone else did, where Father God came out every other word (I still can't pray that way, it's just not my way), we couldn't sing along like the rest of the congregation because we didn't  know all the lyrics to  the contemporary Christian music that was played before the pastor came up to speak, in short, we were outsiders.  Outsiders who loved God fiercely, and so we continued to go, despite what I see now as beautiful and innocent new love for Him.

We wanted to get married at Balboa Park but we also wanted to attend our church's marital counseling.  We nervously held hands, tightly, uncertain of what to expect as we entered the office of one the pastors.  We sat at the edge of our chairs, leaning slightly forward, eager to learn.  He looked at us and without asking anything about us, our Faith, our love, he stated: You're living together.

Before I could clear my throat, Chris, without hesitation replied with a simple: yes.

The pastor sighed. She's in  your house?  She'll have to move out immediately.  My eyes must have grown as big as saucers--looking at Chris I'm sure my eyes pleaded to him: Please.  I'll have no where to go.  But I didn't have to say a word.

And with that, he stood up, walked us to the door and looked Chris in the eye while saying: I can't provide you with premarital counseling while she's living with you.

Love is patient, love is kind.

She.  He never looked at me.  Never said my name.  I walked out of my church that day feeling as if God had closed his door on me.  We weren't wanted. Our sin was too great.

Too ashamed to tell anyone what happened I was in the teacher's lounge one day when a coworker announced to me: So I heard Pastor X told you he wouldn't let you take the premarital counseling classes.  He's right'cha know.  It's a sin what you are doing.  My cheeks flushed scarlet.  I'm reserved.  Quiet to a fault. I felt betrayed.  The pastor had told my coworker.

But that was a lie.  I did need Him.   And though it wouldn't be the first time I'd turn my back on Him, as usual, He patiently waited for me to come back.  And when I did,  here's what He told me: my sin isn't bigger than anyone else's.

Love is patient.  Love is kind. 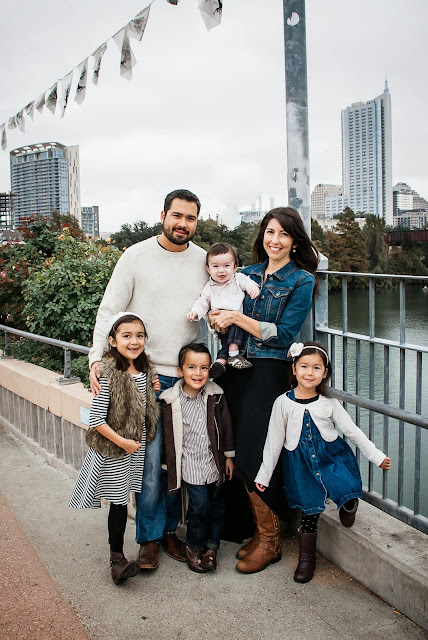 tolleyrose
I'm a wife to an amazing husband, a mother of 4 (Claire,7, Twins: Madeline Max, 4 and Vincent, 9 months ), runner, daughter, sister, aunt. Taking a break from teaching to raise my children; my Moon, my Stars, my Sky and my Sun. I also blog at myfitfamily.com